Desert Hairy Scorpion: What You Need to Know! 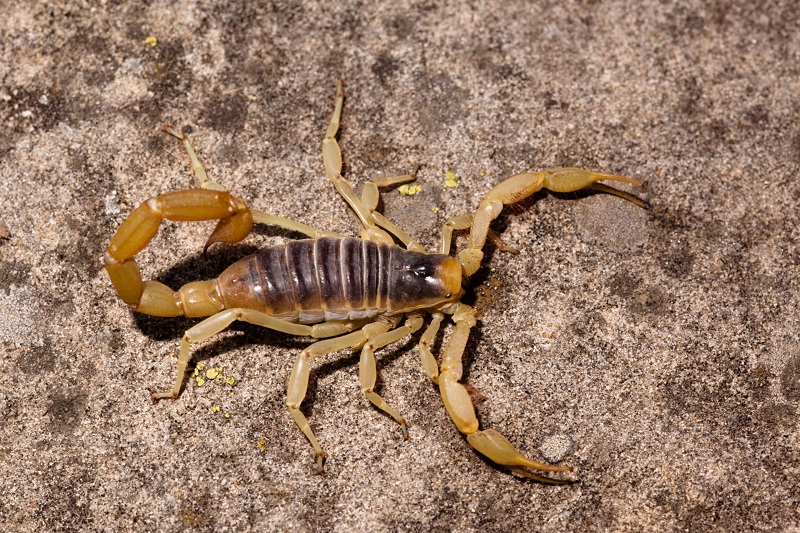 The Arizona bark scorpion is one of the most notable species in Arizona, but over 30 different species live in the state. Some report upwards of 60 types of scorpions scattered throughout the desert region!

Arizona is home to the United State’s largest scorpion: the desert hairy scorpion. Measuring around 7 inches long, this scorpion is one of the biggest arachnids in the state!

Keep reading to learn more about the desert hairy scorpion and determine if it’s a pest to worry about in your home or yard.

While this species is also known as the Arizona desert scorpion, they reside in other portions of the United States. Like other scorpion species, these arachnids prefer to live in humid desert climates.

You can find these scorpions in desert portions of Arizona, Colorado, Nevada, and Utah, mainly in the Mojave and Sonoran deserts. Outside of the United States, they live in different parts of Mexico.

Some scorpion species inhabit left-over burrows from other pests or create their own. Scorpions use these hiding spaces to hide from other predators or escape the extreme heat in the morning and afternoon.

Desert hairy scorpions are nocturnal and hunt for food once the sun sets. You can usually find scorpions crawling outdoors during the evening or night hours. Sometimes, these arachnids can even sneak indoors accidentally!

Are these Scorpions Dangerous?

Most scorpions have venom and are venomous, but only one type in the United States is harmful enough to cause extreme reactions in humans. The Arizona bark scorpion is the most venomous species in the US!

Arizona bark scorpions can cause mild to severe reactions, but medical professionals can treat most stings with antivenom. Young children, the elderly, and pets may experience severe side effects without fast action. Here are some symptoms you may experience:

Always visit a doctor or the emergency room whenever you’re stung by an Arizona bark scorpion. While most stings won’t have severe reactions, these stings could be fatal without proper aid.

What about a desert hairy scorpion sting?

These stings are excruciating, but you shouldn’t have any adverse reactions when stung by these arachnids. Because their venom isn’t potent, these scorpion stings will only cause pain and prolonged swelling.

The ache should resolve within a few hours or a day, but you can use an over-the-counter pain reliever to reduce the discomfort. An ice pack should decrease any swelling or redness left behind by the scorpion sting.

Regardless of the species, if you’re allergic to scorpion venom, always consult a medical professional to avoid life-threatening reactions. Without proper care, you could experience anaphylactic shock!

If you find a desert hairy scorpion indoors, don’t panic! They won’t attack unless provoked, so don’t crowd the scorpion or attempt to pick them up if you find them indoors.

You can try a few things to keep your property safe and prevent r scorpions from invading your home!

Remove Brush and Debris in your Yard

Scorpions love to burrow down in secluded spaces to keep themselves safe. An unkempt yard could encourage scorpions to overstay their welcome and even sneak inside during winter!

In your yard, clean up any discarded branches, tree leaves, logs, or limbs scattered around. Tall grassy areas can even provide scorpions with enough cover to hide within.

Scorpions could use these areas to beat the heat if you have toys or other large structures in your yard. Some scorpions, like the Arizona bark scorpion, enjoy resting on tree bark or other surfaces and may choose to stick around in other rough spaces.

Scorpions enjoy resting in shady spots and could hide within trees or bushes to escape the elements. Palm trees are hotspots for scorpions because of their shady leaves and moisture.

Check out our article here for more scorpion landscaping tips!

Besides looking for sheltered spots, scorpions also head toward certain areas if there are sufficient enough food sources. Yards full of insects or other arachnids could encourage scorpions to stick around or even head inside.

If you have insects indoors, scorpions could follow the insects inside. Whenever you have a severe pest problem that requires remedying, consider contacting a reputable pest control agency to reduce the bugs.

At-home pest control methods can do the trick, but you’ll want robust methods whenever you have a severe infestation. If you have enough insects to encourage scorpions, a pest control professional can provide the aid you need.

Want a proven scorpion prevention method? Scorpion Repel can keep scorpions away from the inside of your home. We have your back!

Our trained technicians will paint a sleek protective barrier on the surface of your home that prevents scorpions from climbing up. Check out this video of our product at work!

Contact us today to schedule an appointment and keep your family safe from scorpions!