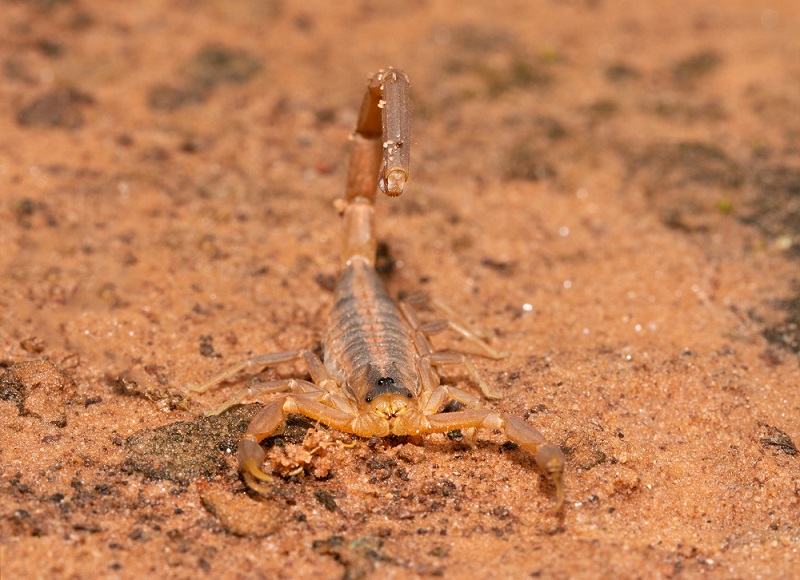 Over thirty different scorpion species call Arizona their home. Because of our hot summers and mild winters, scorpions in Arizona flourish year-round – outdoors and inside our dwellings.

Despite their fearsome reputation, only one scorpion species in the United States is dangerous enough to cause severe reactions. But how can you tell these creepy arachnids apart?

Check out our blog, where we’ll give you a list of the most common scorpion species located in Arizona. Plus, don’t forget that Scorpion Repel is a trusted scorpion-proof pest control agency designed to keep your home safe and scorpion-free!

While we have many scorpions roaming through the deserts, forests, and backyards, there are a few types of scorpions that are more common than others. Some species tend to shy away from human activity, while others are typical and unwanted household guests!

Identifying the type of scorpion in your path or in your home is essential and can prevent severe reactions if they strike. Understanding the type of pest in front of you can even curtail a burgeoning infestation.

Here’s our list of common scorpions Arizona residents may see throughout the year.

Considered the largest scorpion in the United States and North America, the desert hairy scorpion is truly a sight to behold!

These massive scorpions can reach up to seven inches long, almost the average length of a human hand. Also called the giant desert scorpion, this species is one of the largest arachnids in Arizona.

These pests are usually a light straw color with a dark shade of brown running down their backs. With giant pinchers extending from their fronts, desert hairy scorpions can give you an injury to remember!

Commonly found burrowed in dirt or under rocks and branches, the desert hairy scorpion isn’t a typical occupant in many Arizona homes. You could spot one of these scurrying about on a hike or camping trip, but it’s unlikely you’ll find them indoors, as their size limits their ability to enter small cracks or openings.

Larger scorpions tend to have less potent venom, which is true for the giant desert scorpion. Most scorpions are considered venomous, but not every scorpion is dangerous enough to cause significant problems.

What the desert hairy scorpion lacks in venom, they make up in size. Because of their bulk and large pincers, they can easily take down any small prey they choose and defend themselves against threats or attacks.

Avoid irritating or provoking the arachnid if you spot a desert hairy scorpion in your yard or on a hiking trail. Their sharp pinch could leave behind a deep, painful wound.

Curious about more scorpions in Arizona? You may have seen this pest in one of the state’s many desert areas or another like it.

Because of their habitats, Arizona residents don’t commonly see yellow ground scorpions. However, this doesn’t mean they aren’t familiar. This arachnid species are heavily distributed throughout Arizona and other nearby states.

Like most other Arizona scorpion species, the yellow ground scorpion doesn’t have a medically significant sting, but it can still cause problems if you’re allergic to scorpion venom. Their similarity to Arizona’s most venomous species could cause confusion or undue stress too.

A yellow ground scorpion shares an almost identical coloration and build with the United State’s most dangerous scorpion: the Arizona bark scorpion. Mistaking these two may result in a potentially adverse reaction.

While there are many techniques to tell these two scorpions apart, we suggest steering clear of any scorpion you see outdoors or inside. You can never be too safe when it comes to dangerous stinging pests!

To reduce your risk of scorpions indoors, remember that Scorpion Repel’s patented product prevents any of these creepy critters from sneaking indoors.

As the most venomous scorpion in Arizona and North America, the Arizona bark scorpion is a frightening pest for many living in Arizona.

Antivenom can prevent harmful and fatal reactions to an Arizona bark scorpion’s sting. However, these pests can still cause issues for young children, the elderly, immunocompromised individuals, and our furry friends.

Without prompt action, these stings can cause muscle paralysis, body-wide numbness, and extreme pain. When a bark scorpion stings you, quickly head to the emergency room for medical treatment.

Unlike the other species on our list, Arizona bark scorpions are common indoor invaders, exploiting cracks and unseen gaps on our exterior foundation to sneak inside for food and shelter.

Arizona’s winters aren’t as brutal as other states across the country. Nevertheless, scorpions like the Arizona bark scorpion still head inside to escape the chilly weather whenever the temperatures dip in the winter.

Homeowners may not notice as many scorpions from November to March, but when the weather outdoors begins to heat up, scorpions may exit their indoor hiding spots to find a way outside and appear in different places in your home.

Besides entering your home to escape the elements, scorpions may invade in search of insects or other food. Homes with large pest infestations often house secondary pest problems like scorpions or spiders.

Having regular pest control treatments can reduce your home’s scorpion activity. Companies like proof. pest control use pet and child-friendly chemicals that keep your home pest-free.

Because of their highly venomous stings and familiar presence indoors, Arizona bark scorpions are one of the most dangerous scorpions in Arizona. Don’t fret, though! Our proven product, Scorpion Repel, can keep scorpions out and maintain your home’s safety.

Easily identified by two large stripes decorating their backs, the striped bark scorpion is one of the most common scorpions in Arizona.

As their name suggests, members of the bark scorpion family typically find a home under or on tree bark. They also spend their days hiding under rocks and brush piles, exiting their space at nighttime to hunt for bugs and spiders.

Check out this video of a striped bark scorpion eating a roach!

Do you want to reduce the number of potential scorpion guests on your property? Contact us for a Scorpion Repel treatment! Our strong, slick product will physically prevent scorpions from climbing upwards into your home.

Get in touch with us today!