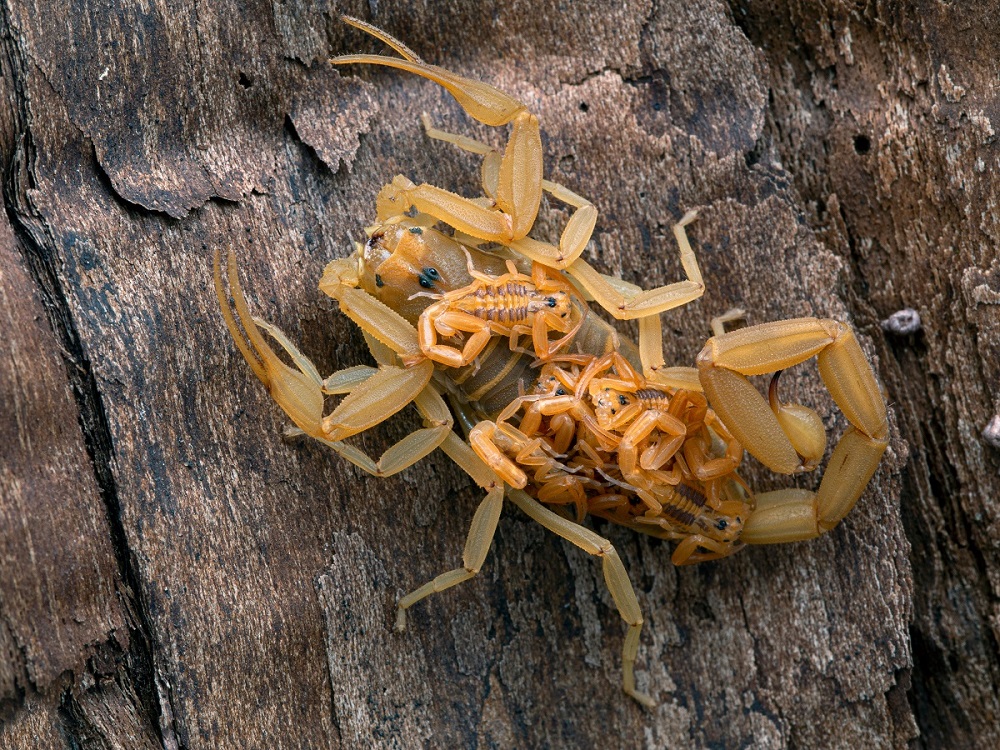 Finding a fully grown scorpion in your home is a nightmare, but what about tiny scorpion babies?

While these pests seem harmless, they can cause almost as much trouble as their parents, especially if you have an Arizona bark scorpion inside!

Arizona is filled with different kinds of scorpions, but don’t worry! We’ll tell you everything you should know about scorpion young to keep you and your family safe!

First, let’s have a quick biology lesson! Despite popular conceptions, scorpions aren’t bugs like mosquitoes, ants, or cockroaches. While they may be as annoying as other insect pests, they don’t share the same scientific classification.

Scorpions are arachnids like spiders, ticks, and mites. They’re even close relatives of other species like butterflies, arthropods, and crustaceans. But don’t worry! You won’t see an Arizona bark scorpion catch a few waves during your day at the beach.

Arachnids have many characteristics that separate them from other insect species, like their number of appendages, body composition, and development. For scorpions, the way they reproduce further distinguishes them from other organisms.

Arizona bark scorpions engage in an intricate and long mating ritual to stimulate reproduction. Two scorpions typically lock their pinchers together and engage in a “dance” where they walk together while the male stings the female scorpion.

Check out a video of a scorpion mating dance below!

Instead of laying eggs like most arachnids and insects, scorpions deliver live young. While scorpions aren’t mammalian creatures, they retain their fertilized eggs inside their bodies until birth.

The amount of time a scorpion remains pregnant differs depending on the species. Some gestate for a few months to a year, while others can stay pregnant for over eighteen months.

A scorpion can produce anywhere from one to two young or even have around one hundred children at once. That’s a lot of scorpions!

Maternal care isn’t something common in many insect and arachnid species. Typically, mammals are the primary animals that tend to their young after birth, while most spiders and bugs opt for hands-off parenting.

Some insects like wasps, bees, and ants take care of their maturing eggs, but the supervision usually falls toward the hundreds of female workers that protect the colony. Instead of the queen insect looking after her eggs, her offspring typically watch over their siblings!

Other species like mosquitoes allow their eggs to mature and hatch without help. After utilizing our blood to encourage egg production, mosquitoes deposit their eggs in stagnant water and typically die before the next generation develops into adults.

Scorpion mothers are active participants in their children’s growth, keeping them close to home until they reach certain developmental milestones. Most scorpion mothers stow their babies on their backs until their first molt.

A scorpion’s first molt is an important component of its continued survival. Young scorpions cannot live without their mother’s protection because of their soft and underdeveloped exoskeletons.

Because some scorpions can give birth to up to 35 babies at once, an Arizona bark scorpion mother could have her hands full with dozens of children!

Have you heard this common myth? Baby scorpions are more venomous because they cannot control their stings. We’ve all heard this tale, but how true is this saying?

Fortunately, this statement isn’t anything more than a common misconception. Young scorpions aren’t more venomous than their adult counterparts, and baby Arizona bark scorpions won’t cause any additional harm.

It’s important to remember that the danger of a scorpion isn’t necessarily dependent on their size but rather the potency of their venom! Some smaller scorpions are more dangerous than traditionally larger species, but size doesn’t usually correlate to deadliness.

It’s unlikely that you’ll find a lone baby scorpion inside away from its mother but not impossible. Seeing these pests indoors could indicate adult scorpions are hiding nearby.

Baby scorpions may accompany their mother indoors for food, shelter, or water. Adult scorpions can give birth to their young indoors, causing you to catch sight of an unpleasant pest!

If you have found young scorpions indoors, you should carefully search your home for additional pests and contact a pest control agency to remove any hidden scorpions.

Keeping Scorpion Babies Out of Your Home

There are ways to keep scorpions away from your home, but preventing baby scorpions is difficult.

Newly born scorpions can’t easily climb inside your home without help, and it’s not likely that these small pests will stray far from their mothers to find shelter elsewhere. If you found a baby scorpion, there’s a good chance an adult with other babies is elsewhere in your home.

Instead of focusing your pest control methods on preventing baby scorpions, try to keep adults from entering! No one wants a few dozen houseguests freeloading in their house, and an Arizona bark scorpion is never a welcome sight!

To help prevent scorpions, you should repair any noticeable damages on the exterior of your home. Seal up any cracks or crevices where insects could quickly crawl inside. Check out this article to learn more about how Arizona bark scorpions can squeeze through small openings!

Even after you cover visible gaps, Arizona bark scorpions can still manage to make their way inside. Is there another way to prevent scorpions completely?

Scorpion Repel has your back! Our product creates a protective seal around the base of your home that scorpions cannot cross or crawl up. You’ll never have to worry about finding scorpion babies indoors with our patented treatment!

Contact us today to learn more or schedule an appointment!