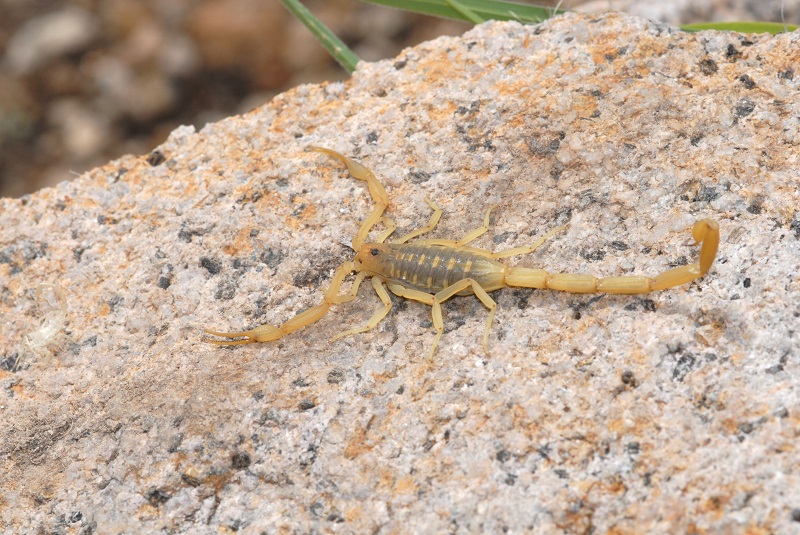 Scorpions are a common sight in many midwestern states across the country. Around the globe, there are over 4,000 different scorpion species. That’s a lot of arachnids!

Only handfuls of scorpions are actually venomous enough to cause harm to humans. The Arizona bark scorpion is the most dangerous scorpion in North America

However, what’s the most venomous scorpion in the world? Keep reading to learn more!

Venomous Scorpions Across the World

Despite their fearsome reputation, only a few scorpion species can cause you harm. Most dangerous scorpion species live outside of the United States in Middle Eastern countries or other desert regions.

All scorpion species have venom and are technically venomous, but most won’t hurt you beyond the initial painful sting.

The black thick-tailed scorpion is one of the largest species in the world. While most large scorpion species don’t have potent venom, this gigantic pest can transmit its toxic venom through a sharp sting.

Unlike other scorpions, the back thick-tailed scorpion has a unique defense mechanism. When threatened, this scorpion can ‘spit’ out venom as a warning before ultimately stinging its victim or attacker.

The initial venom spray isn’t as powerful as its attack but can still incapacitate small animals or insects. While potentially fatal, this scorpion’s sting shouldn’t significantly harm healthy adults. However, immunocompromised people, children, and the elderly could have complications.

Primarily located in North African regions and across the Middle East, the Arabian fat-tailed scorpion is one of the most venomous scorpions found across Asia and Africa.

Like other scorpion species, this pest prefers to hide in deep-set cracks and crevices, only emerging from their hiding spots at night to hunt in the cool evening temperatures for insects or small lizards.

While antivenom is available, an Arabian fat-tailed scorpion sting could still be fatal without proper management. Once stung, you could experience pain, swelling, organ dysfunction, and breathing difficulties.

Because of the venom’s effects on the respiratory and circulatory systems, many victims may experience heart or lung failure. However, with quick action, the antivenom can help you avoid serious injury!

Unlike other desert scorpions that regularly burrow down in sand, foliage, or dirt for protection, the yellow fat-tail scorpion doesn’t need underground support away from the elements. These pests stick around in the wind streams of heavy sand storms.

Because of their toxic venom, these pests claim the lives of many in the region yearly. While most scorpions tend to stay away from humans, accidental stinging can still cause serious injuries or death.

This scorpion’s venom can intensely impact the body, from organ damage to extreme shock.

Most Venomous Scorpion in North America.

While none of these dangerous pests live in North America, one scorpion resides in the United States with a potent sting.

The Arizona bark scorpion (Centruroides sculpturatus) is a common inhabitant within desert regions of Arizona, California, and Mexico. Arizona has many scorpion species throughout the state, but only one can cause significant harm to humans.

Because of an antivenom developed in the late 20th century, Arizona bark scorpion stings aren’t anything to worry about. These stings could have serious side effects for pets, the elderly, and younger children, but most people recover quickly.

When stung by an Arizona bark scorpion, you may experience:

In more severe cases, you could have difficulty breathing, body-wide paralysis, or nausea. Contact a doctor or visit the emergency room whenever you’re stung by a scorpion. These stings could be dangerous without medical attention.

Most Venomous Scorpion in the World

What about the most venomous scorpion in the world?

While typically not lethal in adults, this scorpion’s venom could easily harm younger children and elderly individuals. A sting could prove fatal for anyone with high enough dosages of the toxin.

Because of the high toxicity of the venom, some antivenom doses may not be effective. These stings are significant medical emergencies, so always visit a hospital or doctor’s office to receive treatment.

This pest isn’t located in North America, but individuals overseas should exercise caution because of the lethality of their sting. Scorpion stings are no joke, so always be careful when interacting with highly venomous creatures!

Dealing with the Most Venomous Scorpion Species

Most scorpions prefer to stay hidden in logs, hollow trees, rocks, and underbrush, but sometimes these pests sneak indoors. While most scorpions in Arizona aren’t dangerous, finding an Arizona bark scorpion inside could be unsafe!

Arizona bark scorpions may hide inside your house to hibernate during the winter or to find insects indoors. Bark scorpions look for tiny cracks and crevices to hide until the weather warms, even hiding in some items like your shoes or bed!

Instead of worrying about finding dangerous pests indoors, consider using preventative measures to keep scorpions at bay. Scorpion Repel creates a scorpion-proof barrier on the exterior of your home.

Check our product out at work here in this segment!

With its slick, glass-like surface, scorpions can’t climb your home’s exterior walls. You won’t have to worry about scorpions sneaking indoors to hide! Contact us today to schedule an appointment and keep your home and family safe!